Adding to what has been a chaotic offseason for Tony Bennett and the Virginia program, Junior forward Trey Murphy III has announced that he is declaring for the NBA Draft.

In his first season in Charlottesville, Murphy averaged 11.3 points per game and nearly 30 minutes per game.

While this decision may come as a shock to many Cavalier fans, this does not necessarily mean that Trey’s time in Charlottesville has come to an end. In 2019, the NBA changed their rules regarding declaring for the draft and retaining eligibility. Now, Murphy has the ability to attend pre-draft workouts, sign with an agent, and receive evaluations from pro scouts, while still maintaining eligibility for next season, so long as they announce their intent prior to the NBA Draft.

A great example of this is Mamadi Diakite after the UVA Title run in 2019. The Cavalier big man was able to talk with big league scouts in order to gauge the level of interest in his talents, and then later decided to return for one more season in Charlottesville.

While this is certainly a blow to Virginia’s offseason plans, this does not yet mean that we will not see Trey Murphy III in the blue and white next season. 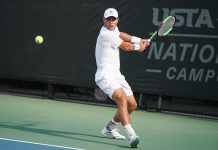