On Tuesday afternoon, the #15 UVA Men’s Basketball team (2-1) defeated St. Francis (1-2), 76-51, in their first home game of the season in Charlottesville. Despite playing to a mostly empty John Paul Jones arena, the defending National Champions gave a glimpse of their full potential in a solid game against a young St. Francis team.

In the third game of the season, the Cavaliers were looking to stabilize the narrative after dropping 11 spots in the rankings, due to their recent upset at the hands of the San Francisco Don’s over the weekend. In the season opener, UVA handily topped Towson, 89-54, with transfer Trey Murphy scoring 21 points off the bench. Transfer Sam Hauser and red shirt fourth-year Jay Huff also reached the double digit mark, as it seemed as though the Wahoos had returned as a serious championship-repeat contender. However, just days later, a stunning defeat at the hands of San Francisco raised eyebrows. While second year Justin McCoy scored a career-high 11 points and 6 rebounds, the team looked confused and out of sorts.

Prior to today’s game, Coach Tony Bennett told reporters that the mantra of the game this afternoon would be, “How do we respond?” The Wahoos swiftly answered his question, appearing more relaxed on offense and patient during scoring drives. They dominated on the glass, pulling down 38 rebounds, shutting down any opportunity for St. Francis to settle into a routine. The Wahoo defense locked down the paint, holding St. Francs to just two points inside the paint during the first half. Instead of simply relying on their strong defense, the Wahoos were able to show off their dangerous offense. At the end of the first half, the Wahoos held a commanding 45-13 lead.

In the second half, the Wahoos kept their foot on the gas pedal, refusing to allow their opponent a chance for an upset. The UVA offense spread the scoring around as four different players crossed the double-digit mark. UVA veteran Jay Huff finished with 13 points and 5 rebounds, while transfer Sam Hauser fired 11 points for the Wahoos, continuing to show his potential as a premier scoring option for the Cavaliers. Off the bench, first year Kadin Shedrick and  third-year transfer Trey Murphy contributed 12 and 11 points, respectively. It will be imperative for the Wahoos to continue this offensive firepower in order to remain a contender for the National title this season.

UVA will play their next game this Friday, December 4 against Kent State. This will be the last chance for the defending national champions to work out the early-season kinks against an unranked opponent, before squaring off against Tom Izzo and the #8 ranked Spartans (2-0) on December 9. 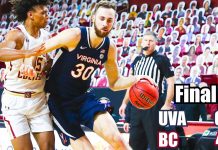 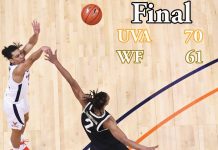