After a fierce weekend of competition in Greensboro, North Carolina, the UVA Women’s Swim and Dive lapped the competition, winning their 15th ACC title. The team won handily with 1486 points, with NC State in second with 1317 points, and Louisville placing third with 1006.5. The Hoos got off to a strong start and never looked back, winning the meet the entire time.

It was another record-shattering weekend, with the Wahoos rewriting UVA, ACC, and NCAA record books. On the first day of competition, the team of Caroline Gmelich, Alexis Wenger, Alexa Cuomo, and Kate Douglass beat the American and NCAA record in the 200 yard medley relay. That same night, the 800 yard freestyle relay of Kyla Valls, Alex Walsh, Paige Madden, and Ella Nelson also took down the UVA and ACC meet records. This was the 14th year in a row that the Hoos have won the 800 yard freestyle relay. Head Coach Todd DeSorbo called their performance on that night “speechless” and cited momentum from Jocelyn Porter’s sixth place finish in diving as a motivating factor in starting the meet.

For the second year in a row, distancing freestyler Paige Madden won the ACC Championship’s Most Valuable Player award after taking the top prize in the 1,650 yard freestyle, 200 free, 500 free as well as two relays, the 400 free and 800 free relays. It is impossible to overstate the power that this fourth year has as both a leader on the team and as a competitor in the water. Last year, she did not receive the opportunity to compete at the NCAA Championship, but prepare for Madden to bring the heat on the national stage.

Despite Madden’s dominance, the next generation of Wahoos proved that the future is bright. First year Alex Walsh placed third in the 200 yard backstroke with a time of 1:51.12, adding to her relay gold. In her second ACC Championship, second year Kate Douglass won the 100 yard freestyle and another title as a member of the 400 free relay. Douglass also set a new ACC meet record as the leadoff in the 200-yard freestyle relay, with the relay winning the ACC title. Douglass and Walsh squared off in the 200 yard Individual Medley, dusting the competition and going 1-2 on the podium.

Not to be outdone, Ella Nelson, another second year, placed third in the 200 yard breaststroke, edging out teammate Anna Keating by two seconds. Later that weekend, she broke the ACC Record in the 400 yard Individual Medley. Second year Lexi Cuomo placed second in the 50 free. These underclassmen will be crucial if the Wahoos want to continue their ACC dominance.

UVA also clenched the top two spots in the 200 yard butterfly, with Jessica Nava and Abby Harter placing first and second respectively. The 100 yard butterfly was also a strong event for the Hoos, with five women placing in the A final and Kate Douglass winning with Lexi Cuomo right behind her. This weekend, there wasn’t an event that didn’t favor the Wahoos.

The women’s team will have a break until the NCAA National Championship where they will look to claim a position on the podium. In 2018, the women’s team placed 6th, but as their recent ACC dominance suggests, this is one of the strongest teams the Wahoos has ever put together, and Coach DeSorbo is eager to win his first National title with the team. Our coverage will continue this weekend with the Men’s Swim and Dive ACC Championship this weekend, Feb. 24-27. 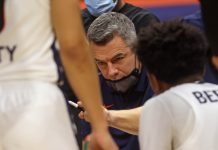 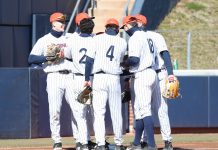 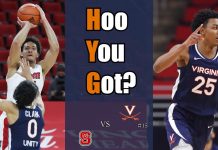 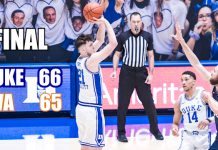 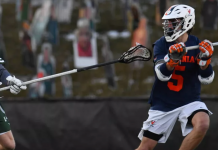 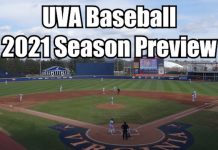