Match one was a thriller against the host Virginia Commonwealth University Rams (4-4) which the Hoos won in five sets. VCU jumped out to a fast start in the first set and won 25-15, using a .333 hitting percentage compared to UVA’s .077. The Hoos bounced back to take set two and set four after dropping set three. In the fifth set, UVA was able to limit the Rams to a -0.1 hitting percentage (3 kills and 6 errors) to earn a 15-11 victory. The key differentiator was that Alana Walker led the Hoos with 10 blocks out of the 14 total for the team. Walker added 10 kills to earn a double-double in the contest. Other standouts were Grace Turner with a match-leading 19 kills. Brooklyn Borum with 14 kills and 24 digs, and Madison Morey with 10 assists and 16 digs, giving the Hoos three players with double-doubles.

In the second match of the tournament on September 11th, the Hoos couldn’t keep up with the #4 Ohio State Buckeyes (8-0) as they fell in three sets. Ohio State outperformed UVA in every category and used Gabby Gonzalez’s 14 kills and 12 digs to pace the team along with Mac Podraza’s 34 assists. Grace Turner and Brooklyn Borum each had 10 kills in the contest as the Hoos couldn’t topple the top-five ranked team.

The Hoos will have a three-match homestand with a split doubleheader against Bellarmine and Georgetown on September 17th and a match against Fairleigh Dickinson on September 18th. 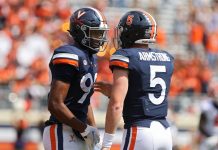