On Monday afternoon, the Associated Press ranked the Virginia Cavalier men’s basketball team #5 in their weekly Top 25 rankings, returning the Hoos to the Top 5 for the first time since the beginning of the 2020-2021 regular season. Virginia also received one first place vote in this week’s AP Top 25 poll.

The move up from #16 to #5 comes after two impressive wins for the Cavaliers in the Continental Tire Main Event in Las Vegas. Last week, the Hoos beat then #5 Baylor 86-79 and then #19 Illinois 70-61 to win the tournament and start the season with an undefeated 4-0 record. For his efforts, Reece Beekman was named ACC Player of the Week for the first time in his career.

UVA is now the second highest ranked team in the ACC, only behind #1 North Carolina. The Cavaliers will look to keep their undefeated record and move further up in the rankings when they return to action this Friday at 6 PM at John Paul Jones Arena against the Maryland Eastern Shore Hawks. 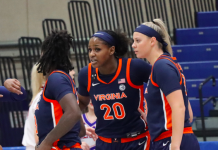