The Virginia Cavaliers (0-1) opened regular season play with a stunning loss to the Navy Midshipmen (1-0), 66-58. UVA started the season ranked 25th in the nation, but they could now be on the outside looking in, after falling to an inferior opponent. With question marks looming before the season, the Cavaliers let this game slip away after a lackluster performance.

Navy shot out to a quick 5-0 lead. However, the Hoos were able to force three straight turnovers to take a 7-5 lead. Navy junior guard Sean Yoder would drain a three, which allowed for Navy to stay in the driver’s seat until the final buzzer sounded. It was a positive start to East Carolina transfer Jayden Gardner’s career, as he scored eight of UVA’s first 16 points. Navy’s success revolved around the perimeter, as they hit eight threes on 12 attempts in the first half, compared to the Hoos’ two makes on eight tries. Navy senior guard John Carter Jr. did almost all his damage in the opening half, as he scored 16 points and finished with 19. Yoder was perfect from the outside, hitting his three attempts. Gardner had 12 for the Hoos, and sophomore guard Reece Beekman added 6 points and contributed 4 of UVA’s 8 steals. Navy led 42-35 at the end of the half.

Both offenses shot over 53% from the field in the opening half, but these percentages would dwindle. The Hoos shot 28% from the field in the second half, and Navy shot 36%. The game would get ugly with about 12 minutes left in the game. From there, the Cavaliers had six turnovers, compared to Navy’s four. Navy had a scoring drought that lasted for about four and a half minutes in the final ten minutes of the second half, which allowed UVA to tie the game up at 55 with 8:45 remaining, but they would not score again until there were only 15 seconds left. It was a sloppy ending for both sides.

UVA had question marks regarding their talent depletion from last season. Trey Murphy III, Sam Hauser, and Jay Huff are gone. The team had to find a new go-to guy, and Gardner looked up for the challenge, as he scored 18 points. Out of the returning players, the leading scorers from last season were Kihei Clark (9.5 PPG) and Beekman (4.7 PPG). They did not return much of their scoring, and it was evident by the scoring drought when the pressure built up in the closing minutes.

The Cavaliers’ defense looked strong in the paint against the undersized Midshipmen, but they were exposed from the outside. Navy shot 11-21 from three, and it was the main reason they were able to walk out of John Paul Jones Arena with the win. UVA’s defense forced 17 turnovers and had 12 steals, as Beekman led the way with six. Beekman was scrappy on defense, as he was able to poke the ball away consistently. The Cavaliers are known for their defensive prowess, and they made the necessary adjustments to slow Navy down. However, the deficit was insurmountable due to the poor performance on the offensive side of the ball.

The Hoos are now 22-2 in their last 24 season openers (their last loss came against George Mason in the 2012-13 season). It is not an ideal start for the Cavaliers, but there is still a lot of season left to play and hiccups happen in college basketball. Virginia looks to rebound and regain confidence as they take on the Radford Highlanders on November 12th at 7 P.M. at John Paul Jones Arena.

Hoo You Got: UVA vs. Pitt Game Preview

UVA Basketball Looks to Bounce Back Against Radford 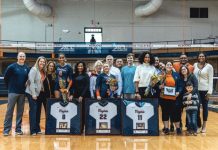