This afternoon, Tony Bennett was able to secure a commitment from one of the top players in the transfer portal. Armaan Franklin, a six-foot-four guard from Indianapolis, IN, announced his decision to transfer to the University of Virginia via his social media accounts.

Excited about the next chapter in my hoops life. Still, have to say a big thanks to the IU community, fans and my teammates for all their support. Know that I appreciate you all so much! ⚔️🔹🔸⚔️ @UVAMensHoops pic.twitter.com/NErzsdMDXL

Franklin, a rising junior, led the Hoosiers in scoring and three point shooting this past season, averaging 11.4 points per game and shooting 42.9 percent from behind the arc.

Franklin will join Australian guard Taine Murray as a part of UVA’s incoming class. In an offseason that has gotten off to a shaky start, this commitment from one of the best available players, could be a sign of brighter times to come. 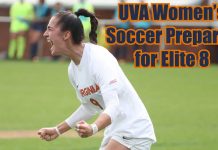