Virginia Governor Ralph Northam has apologized for his 1984 medical school yearbook page, which was released on the internet Friday and features a man in blackface beside another in Ku Klux Klan garb. Northam admitted that he appears in the photo wearing one of the “clearly racist and offensive” costumes, though he did not specify which of the two men is him.

According to The New York Times, Northam is “deeply sorry” for the decision to pose for the photo and for including it in his spread for the Eastern Virginia Medical School yearbook more than 30 years ago. The image surfaced online on conservative website Big League Politics amid what has already been a turbulent week for the governor, who has been accused by some Virginia Republicans of supporting infanticide following comments on late-term abortion.

In a statement addressing the photo, Northam asserted his commitment to continue in his role as Virginia’s governor, despite calls from some for his resignation.

“This behavior is not in keeping with who I am today and the values I have fought for throughout my career in the military, in medicine, and in public service,” Northam said in a statement released Friday evening. “But I want to be clear, I understand how this decision shakes Virginians’ faith in that commitment. I recognize that it will take time and serious effort to heal the damage this conduct has caused. I am ready to do that important work. The first step is to offer my sincerest apology and to state my absolute commitment to living up to the expectations Virginians set for me when they elected me to be their Governor.”

Most University leaders have not yet publicly reacted to the governor’s latest controversy. As of Friday evening, neither the University Democrats at UVA or the College Republicans at UVA had released a statement on the photo. The College Republicans had previously condemned Northam earlier in the week for his “sickening comments on H.B. 2491, which would repeal restrictions on abortion in the third trimester, allowing a woman to terminate pregnancy during labor.” Northam, a pediatric neurologist, came under fire for his support of legislation that would permit abortions up to the point of delivery in cases where the mother’s life or health was at risk.

“I’m surprised that [Northam] did that. I’ve met him a number of times,” the president said to reporters. “Do you remember when I said that Hillary Clinton was willing to rip the baby out of the womb? That’s what it is, that’s what they’re doing…This is going to lift up the whole pro-life movement like maybe it’s never been lifted up before. The pro-life movement is very much a 50-50, it’s a very 50-50 issue, actually it’s gained a point or two over the years.”

The controversy surrounding Northam only worsened with the release of his medical school yearbook page on Friday afternoon. Shortly afterwards, Director of the University Center for Politics Larry Sabato gave an interview with Charlottesville news outlet NBC-29, where he urged the governor to address the photo’s legitimacy “now…not tomorrow, not Monday, [but] this evening.”

Northam responded to the public outcry shortly after 6 p.m. “Earlier today, a website published a photograph of me from my 1984 medical school yearbook in a costume that is clearly racist and offensive,” he said. “I am deeply sorry for the decision I made to appear as I did in this photo and for the hurt that decision caused then and now.”

The governor was elected in November 2017 and celebrated a nine-point margin of victory against his Republican opponent, Ed Gillespie. Whether fallout from the past week’s debates surrounding Northam’s character will affect his future career, whether in Virginia politics or on the national stage, remains to be seen. 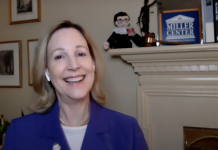