Visitors to the Miller Center of Public Affairs this past Wednesday were treated to a talk hosted by the University Democrats (or “UDems”) entitled “President Trump’s First Year.” During the event, Director and CEO of the Miller Center Bill Antholis discussed the first year of the Trump presidency within its grander historical context, basing his talk on recent scholarship from the Center.

Antholis, who received his bachelors degree in Government and Foreign Affairs from UVa in 1986, has already established a prolific career in the areas of public policy, history, and politics. Before coming to the Miller Center, Antholis served as Managing Director at The Brookings Institution, worked in the White House in a variety of positions related to international and economic affairs, and published extensively on subjects ranging from U.S. politics and foreign policy to climate change and trade. For Antholis, this talk represented the culmination of three years of his scholarship at the Miller Center.

“We wanted to go back and look at previous presidential first years and understand the flow and dynamic of the first year,” said Antholis. “The problems are greater, the responsibilities are greater, the options for any president to change things are limited. The truth is, no matter who you are, if you’re elected president you feel that in your first year in office. There is nothing quite like taking over the federal government.”

Joseph Dennie, a second year at UVa and a member of UDems, stressed the relevance of Antholis’ talk to students, particularly as a way to better assess the first year of a presidency that has seen high staff turnover and pervasive general dysfunction.

“Being able to have comparisons from history will be helpful in understanding the magnitude of [the Trump Presidency],” said Dennie. “The talk…has been something that we have been working on coordinating for a little while now. Some of our members had first interacted with Dr. Antholis through politics classes or through programming at the Miller Center. We thought that he would be an engaging guest to have at one of our meetings, and thankfully he was available to speak.”

During the talk, Antholis highlighted his enthusiasm about recent research from the Miller Center as well as contributions by students. For Antholis, speaking with students presented an incredible opportunity to hear young citizens’ perspectives on the Trump Presidency.

“Our democracy is ultimately in the hands of our citizens – we who rule, and who are ruled in turn,” he stated. “We elected Donald Trump as president, we are experiencing his term of office (as with every other president), and we will have an opportunity to assess and decide whether we want that form of government.” 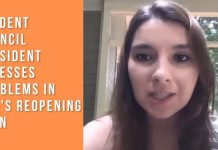 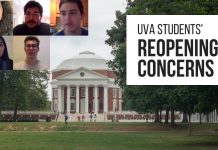 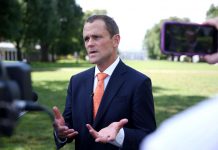 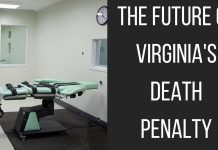