Now that Men’s and Women’s Squash are official varsity sports at UVa, it’s time to get familiar with them.

In late June 2017, UVa Director of Athletics Craig Littlepage announced that squash would be added to the list of varsity sports, becoming the 26th and 27th teams at the school. This gave more funding to the program, allowing for international recruiting, and enabling financial aid to be granted to squash players. Although intercollegiate squash is not recognized by the NCAA, the sport is sponsored by the Collegiate Squash Association.

WUVA News sat down with William Braff, a first year member of the Men’s Squash team, to get to know UVa’s brand new sport.

When asked about league logistics and how matches work, Braff responded: “Every team in the Ivy League and NESCAC have official squash teams, so we mostly play teams from these leagues. We are the only school in ACC that is varsity, however most have club programs. We will be playing some of these teams in upcoming matches.”

“We often go to the Northeast and play two or three schools up there. The top 15 players, decided by coaches and inter-squad play, travel to these matches. The top 7 on the team play in both matches. There are cases where there are substitutions for the 8th and 9th ranked players, replaced by the 10th and 11th competitors. There are also exhibition games for lower ranked players that are not counted towards the final score.”

The matches are played for the best of 5 games, and each game is played to 11 points. Every match win counts as a point, and the school with the most points at the end of all the matches takes the victory.

The UVa squash team typically practices 5 times a week at the Boar’s Head facility, where tennis also practices. Braff explained that the team just broke ground on an official UVa facility, which should be completed by June of 2018.

When asked how the new team looks, Braff explained: “The team is doing pretty well this year, a bit inconsistent. We are somewhat young, and have three first years playing in top nine. We only graduated one kid from last year. Hopefully we can continue to get better and improve out record.”

The UVa Men’s Squash team has a current record of 1-1, while the Women’s teams sits at 2-0. Their first match was this weekend, where they traveled to Dickinson College in Pennsylvania. The men took a loss to Dickinson while the women prevailed. Both teams defeated Franklin and Marshall. 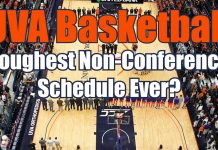