The Virginia Cavaliers’ football season opener on September 19th against the Virginia Tech Hokies has been postponed. Following increasing COVID-19 issues in the Virginia Tech football program, the Hokies have decided to stop all football activities for at least four days. Virginia’s football program has not reported a positive COVID test in the past three months. In a statement released on Saturday, Virginia athletic director Carla Williams said, “These are very challenging times. We understand and respect the decision by Virginia Tech. I know both teams and both fan bases were looking forward to opening the season next weekend. We’ll work with the conference and Virginia Tech to reschedule.” Virginia’s first game of the season will not played on September 26th at Scott Stadium against Duke. Virginia and Duke were originally scheduled to play on November 14th but both teams had an open date on September 26th. This will allow the possibility for the Virginia-Virginia Tech game to be rescheduled for November 14th if that can be arranged with the ACC. 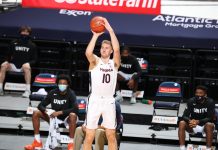 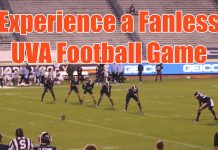 Silence at Scott Stadium | Experience UVA Football with No Fans