Freshman Congressman Bob Good, who represents Virginia’s 5th District, defended his votes to sustain objections to this week’s Electoral College certification after a pro-Trump mob stormed the Capitol on Wednesday. After the lockdown ended and Congress reconvened, some lawmakers previously expected to vote with the objectors scrapped their plans. Good, however, proceeded with his objection in the aftermath of violent unrest.

In a statement on his website, Good provided an explanation for his controversial decision.

“This is about more than the 2020 presidential election; it is about all future elections and Congress doing its constitutional duty to ensure election integrity and to not accept electoral submissions from states with sufficient evidence of fraud, which warrants full investigation, as well as states where legislators did not ensure the law was followed or ensure the integrity of their elections,” Good wrote. “I will continue to do my best going forward to fight in Congress for the people of Virginia’s 5th District and for the principles that have and will continue to make America the greatest nation in our history.”

Good did not cite specific evidence for election fraud in his statement. After President-elect Joe Biden secured his win in November, President Trump refused to accept defeat and sought to overturn the results, culminating in his encouragement of this week’s mob. Yet over 60 lawsuits filed by the president and his allies have failed as of Jan. 8 — with about 90 separate judges, including those appointed by Republicans, ruling against allegations of fraud due to lack of evidence or standing.

U.S. Circuit Judge Stephanos Bibas — appointed by President Trump himself in 2017 — delivered the unanimous opinion of the 3rd Circuit Court of Appeals in December rebuking the president’s claims.

“Free, fair elections are the lifeblood of our democracy,” Bibas said. “Charges of unfairness are serious. But calling an election unfair does not make it so. Charges require specific allegations and then proof. We have neither here. Voters, not lawyers, choose the president … The [Trump] Campaign’s claims have no merit.”

“YOU escalated the intellectually vacant and dangerous STOP THE STEAL movement,” Riggleman wrote, addressing Good. “Your rhetoric is cheap and spineless. #VA05 deserves better. Nice job starting your term out by inciting a riot in the Nation’s Capitol.”

Former Representative Tom Periello, the last member of the Democratic Party to occupy Good’s seat in Congress, chose instead to focus on the politicians who changed their minds after the violence.

In the early hours of the morning on Thursday, Congress completed the electoral count and certified Biden’s victory. Afterwards, the president acknowledged for the first time that a transition of power will occur on inauguration day. A bipartisan group of lawmakers now debate whether to permit him to finish his term or to oust him in the final days of his presidency, either through impeachment or by invoking Section 4 of the 25th Amendment. Meanwhile, some House Democrats support a resolution to expel any of their Republican colleagues who supported the president’s failed efforts to overturn the election — including Congressman Good.

“Our Democracy is Fragile:” Notes from Prof. Sabato’s “Democracy Dialogues” 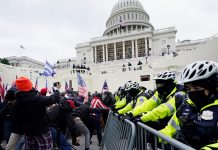